Humans and animals alike all require some form of rest or they would not be able to actively function indefinitely. So what needs to be established is how different species “rest” or “sleep”.

The simple answer to the question is yes. Fish do sleep but definitely not in the conventional sense. However, there is definitely scientific evidence which supports the notion that fish do sleep. It is difficult to determine whether fish sleep due to their lack of eyelids they are disturbed very easily.

How Do Fish Sleep?

The way a fish sleeps will depend mainly upon the environment they are in. For example, aquarium fish will sleep differently to those fish that frequent deeper waters – like sharks. Read on for the various ways different fish sleep.

Do Fish Swim While They Are Sleeping?

By all accounts, most fish will adopt a certain posture when they sleep. More often than not, they do not change that posture or routine when sleeping. That is normally how the fish experts determine whether a fish is asleep or not, by examining the posture every day at a similar time.

Fish also normally choose the same or similar spot when they want to sleep. Remember that the fish environment is not a safe one, by any stretch of the imagination, so a considerable amount of thought needs to go into a choice of sleep venue, so to speak.

Again, there is a behavioral pattern that helps determine whether a fish is asleep or not. There is one exception to the rule though and that is the shark.

However, sharks – because of their physical make-up – cannot afford to stop swimming while they are asleep.

How Long Do Fish Sleep For?

The answer to this question is also heavily dependent on the fish species in question. You also need to consider the environment that those fish are in and what they are forced – or not – forced to do while living in that environment.

For example, if the fish are in an aquarium or just a household tank, the internal and external lighting becomes a pertinent factor. If those lights are on all day as well as night, there is the distinct possibility that those fish will not get the sleep they either desire or need.

So, an aspect that has a significant impact on how much sleep some fish get is in fact determined by the associated human behavior. For example, we all know somebody who would likely forget to switch those fish tank lights off – at least once a week.

Some fish sleep more at night, while others sleep more during the day. Again, human behavior towards those that live in a tank will have a significant, if not detrimental impact on how much sleep those fish get and the sleep patterns adopted.

Do Fish Sleep Upside Down?

While it is not a very common feature for sleeping fish, there have been sightings of Goldfish that do hover upside down.

However, in this context, we do acknowledge that upside-down can be very loosely defined. Sometimes that could just mean the body of the fish is slanted heavily to one side.

Whatever the position, the experts will tell you the fish being upside down has nothing to do with it sleeping but has more to do with suffering from some or other swim bladder disease.

Among the more glaring factors which need to be taken into account when determining if fish are asleep, centers around the seemingly small matter of eyelids.

For those among us who did not get the memo, fish do not have eyelids. Yes, we know some of you have overlooked that tiny but highly significant detail.

Another detail that you have probably overlooked is that fish are not mammals. Most studies that center around sleep and sleep patterns have to do with the behavior of mammals. It is perfectly understandable.

Sleep – and the quality of sleep – is a subject that is particularly important to human beings in the 21st century. What animals do is not always of interest to us.

So, in the absence of any meaningful detail on brain performance and the incapacity to study any form of prolonged eye closure, we need to search elsewhere for useful data on how fish sleep, why fish sleep and when they sleep.

Stéphan G. Reebs, of Université de Moncton, completed a useful investigation on this subject matter between 2008 and 2014. His research is the primary source for many who have dared to write about this subject.

He identifies four specific behavioral patterns that help determine whether a fish is sleeping or not. Chief among those four explanations is prolonged inactivity. You know that moment when you look into your fish tank in horror because you think your fish might have died? Chances are the chap is merely sleeping.

Fish aficionados are also able to determine if a fish is sleeping, merely by examining its posture. More often than not, a certain shelter is also primarily associated with that sleep posture.

The type of shelter used often hinges on the type of fish we are talking about here. It stands to reason that larger fish are likely to rest in different shelters and adopt different sleep postures to those that are smaller than them.

See also  Why Does My Cat Sleep Under My Bed?

In addition to that – and thirdly – the rhythms adopted during a 24-hour cycle also help determine whether a fish is sleeping or not.

Finally, studies are conducted on whether a fish is aroused or stimulated when you opt to disturb it.

How Do You Know If a Fish Is Asleep?

So, as a brief recap, these are the things you need to look out for when trying to establish if a fish is sleeping.

Has that fish been motionless or inactive for a protracted period? If the answer to that question is YES, then the fish is likely to be asleep… or dead. Probably the former though.

Is the fish in the same posture that it was the last time it was seemingly immobile? If the answer to that question is YES, then your fish is probably getting some fake shut-eye (remember that he does not have eyelids).

In addition to this, you need to establish if your fish has “hidden” in the same shelter while doing all of the above. If the answer to that question is YES, then your fish is probably napping… and good for him.

Does all of the above happen at the same time every day? If the answer to that million-dollar question is YES, then your fish is probably asleep.

Is your fish seemingly less sensitive to common disturbance, from the surrounding environment or even from you? If the answer to that question is YES, then you should leave your fish alone because he is sleeping.

If, after everything you have spotted above does not convince you, there is still the option to conduct a final and probably cruel examination.

Reebs explains that studies have been done, by preventing fish from sleeping. Effectively sleep deprivation.

The primary objective of those studies was to determine the behavior of the fish would be once left alone after a prolonged period of deprivation.

The findings, more often than not, are that the typical sleep behavior previously registered by the fish will become more common if and when left alone. The term often bandied about under these circumstances is “homeostatic regulation of sleep”.

So, the fish is essentially catching up for lost time “in the sack”. This might sound familiar to some humans, after a series of extended nights out.

Do Fish Sleep on Their Side?

When you notice that your fish is either floating or lying down on its side, the first port of call will be to determine its health.

It is unlikely to have anything to do with it sleeping. A common ailment is what the experts call Swim Bladder Disorder.

If your fish does not have the disease, and you find it floating on its side, there is also the distinct possibility that it could be dead.

You often see cases of the latter in polluted rivers and other similar water streams, where dozens if not hundreds of fish can be found floating upside down or washing onto the shore.

See also  Where Do Squirrels Sleep?

Whatever the cause, be sure that a fish floating upside down or on the side is not likely to be sleeping.

It is commonly understood that most dreams take place during the Rapid Eye Movement (REM) phase of the sleep cycle. When fish are asleep there is no REM that takes place. We know this because fish do not have eyelids.

However, as has been established in other sections of this article already, there are other ways to determine whether a fish is actually sleeping. Trying to establish whether a fish is dreaming tends to be a whole new ball game altogether.

There is honestly no real way of knowing. However, based on what we know about mammals and even some birds, it seems highly unlikely that fish dream while they are asleep.

What Fish Do When They Sleep?

The sleep behavior tends to vary from fish to fish and upon changing environments.

Some domesticated fish simply sleep at the bottom of the tank at night. That is an interesting observation, by the way, because it appears that many fish also sleep at night just like mammals.

When those fish are at the bottom of the tank, you will also find that there is a distinct drop in the respiratory rate and eye movement is seldom detected under those circumstances.

When you feed your fish or put the lights on, there is normally some form of ready response from the fish.

When the fish is asleep, that movement is notably absent. Sometimes – and this depends on the fish in question, the typical posture will be for the fishtail to be flat on the ground.

The fins are normally stretched out and the body will often be inclined at about 30 degrees to the vertical. In other words, the fish will be immobile and slightly slanted.

There are also some fish which will just float in the water column and this is sometimes the behavior that will scare owners the most. They sometimes float horizontally or with the head slightly up. When they are in this position, you will also find that sleeping fish do not move their mouths or gills as often.

Hopefully, I have given a couple of strategies you can use to determine whether or not your fish is asleep.

If you have any concerns about your fish, you can consult a veterinarian. Also, consulting someone at a pet store that specializes in fish could be helpful.

Just like all pets, we get to know and love them by observing their behaviors. So check out the strategies to see if your fish does sleep and enjoy!

Do you wonder how other animals sleep check out this page here I have written about all kinds of living creatures and their sleep habits? 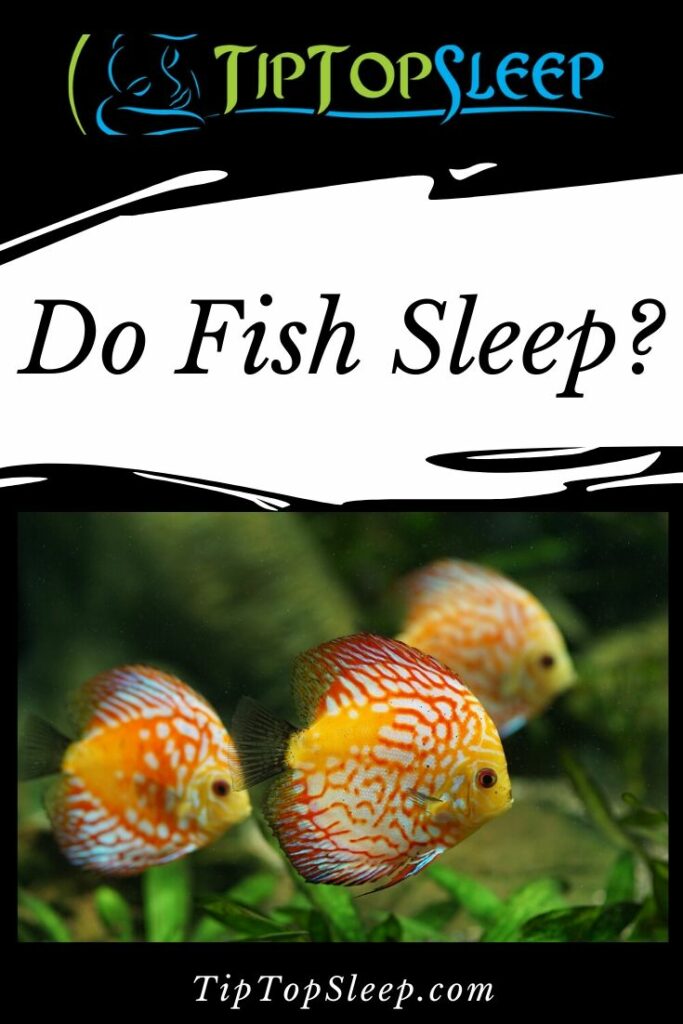