There is a commonly held view that sleeping on your back is really good for you because it tends to present fewer physical difficulties.

The quick answer if you want to learn to sleep on your back is… Firstly, give yourself a period of time before you give up trying, say 8 to 12 weeks. Secondly, use a pillow that is comfortable for you when sleeping on your back. Lastly, put something under your knees as it helps keep you on your back all night.

Learning To Sleep On Your Back

Regardless of how good it is for you, changing your usual sleep position to sleeping on your back can prove to be an enormous undertaking. In this article, we shall explore ways to make that mission somewhat simpler to complete.

Sleeping on your side and stomach are almost always the more tempting options.

However, they tend to exacerbate injuries or physical strains that might exist in your shoulder, ribs, and neck. That is normally as good a sign as any that sleeping on your side and belly are not necessarily that good for you.

It would be prudent to note that sharing a bed with somebody tends to complicate matters when you are trying to sleep on your back. It does not mean the task will be impossible but it will be significantly harder. So, that is the caveat there.

Set yourself a time frame. Studies have shown that it takes more than 2 months before a new behavior becomes automatic. Source.

In fact, that is 66 days in some cases it can take anywhere from 18 days to 254 days for people to form a new habit.

A way to work around that – and quite frankly a meaningful way to teach yourself to sleep on your back – would be to place a set of four pillows around you on the bed.

Having that pillow under the knees should actually be a long term arrangement if you can manage it because it helps support the back and by doing so allows the muscles and the alignment in your spine to stay as close as possible to where it should be.

See also  How to Sleep with Engorged Breasts

In the long term, this also allows your back to heal better because there is ultimately less pressure on the nerves in your lower spine.

The third and fourth pillows should be placed on either side of you. When you have your arrangement laid out, the corners of those pillows should create a space that takes on the appearance of a square.

That “square” is where your back will be when you eventually decide to sleep. The pillows will help prevent you from rolling over to either of the sides. It is a trick that you play on your mind.

The pillows to the two sides of you will be placed under your arms, most of the time.

They do not have to stay completely connected to the other pillows. You can shift them around if you like, as long as those movements do not defeat the primary objective of learning to sleep on your back.

How You Sleep Affects Your Health

In the past, in other articles on this site, we have gone on about the benefits that come with sleeping. Those benefits can never be fully realized if we do not use the time we spend sleeping effectively.

Effective sleep allows the brain to operate at an optimal level. One of the various aspects which determine whether sleep is effective is the sleeping position.

Sleeping On Your Back

We have already concluded – although some might disagree – that sleeping on your back is probably the best way to go. Most experts will tell you that this posture is the best for resting the spine, neck, and arms. Especially if you are recovering from some form of injury or strain.

Some doctors also say that sleeping on your back helps reduce headaches, that it helps keep your spinal line and prevents any other chronic conditions that sometimes come as a result of undue pressure on your spine.

Sleeping on your back is also believed to relieve sinus pressure because it allows your sinuses to drain properly.

Sleeping On Your Back For Looks

Apart from general health, which is very important, the manner in which you sleep is also believed to have a meaningful impact on your looks. It is also worth considering that looking better often means feeling better. So, looks are actually a health factor.

See also  What Is Sleep Hygiene? (The Facts)

Bags under the eyes are often associated with poor sleeping habits. Source. There are often anecdotes on how sleeping on your back helps reduce the bags under your eyes.

This is actually very similar to sleeping on your back. Truth be told, it is merely a variation of back sleeping. The most telling difference, perhaps, is the position of the arms when sleeping.

In the starfish position, the arms will be placed upon both sides of the head. The feet will be spread fully apart. That also means you are unlikely to have much joy with this position if you are going to be sharing a bed.

There is also the commonly held (and not totally misguided) view that there will be a reduction in the number of headaches you encounter when you do sleep in the starfish position.

If you are going to insist on lying in this position, it is best to lie on your left side because that is believed to be better for your vital organs.

Just as tempting as lying in the log position is the desire to sleep on your side but with your legs slightly bent. When in this position your arms are usually outstretched and your head is usually slightly off-center.

Once again, if you are going to insist on this position it is best to do so while lying on your left side because that is best for your vital organs. Source.

The fetal position involves lying on your side with your knees right up to your chest. More often than not, your chin will be tilted downwards – just like that of a fetus in the womb.

Women love to sleep in this position. However, men have been known to adopt it too.

Very few people encourage sleeping in this position and to be quite honest, it is not really the most comfortable of the positions to sleep in. It is not good for the spine – and more often than not – you will feel that.

If you sleep too long in the stomach position, you will also likely encounter some pain in the neck and the lower spine. There are ways to trick your mind into avoiding sleeping on your stomach.

A trick that does get mentioned often enough is that of taking a marble and sticking it onto your chest. More often than not, you will feel that marble press against your chest.

Two things could happen under those circumstances. You might be frustrated by it, lose your temper, pull the marble off and throw it at the door. That is the worst-case scenario though.

Ideally, what will happen is that you feel the marble pressure on your chest and roll back into a better sleep position. More often than not, sleeping on your back is the best option.

Your chances of success are considerably higher if you are one of those heavy sleepers. The other option is to put that marble on your shoulder.

Chances are it will hurt a little more than having pressure on your chest but not that much more.

That could wake you but it really should not matter that much if it wakes you up. Ultimately, it will likely prompt you to turn around and sleep on your back again. That is all that really matters.

Another decent idea is to grab a set of ankle weights or something similar and put them inside your pillow. You can then put that pillow on top of your belly or on your chest, with the weight keeping that downward pressure on.

Some of that pressure is likely to skew the way your head is and you will likely find that this allows you to sleep comfortably on your back. It is more psychological than anything else at this point.

This is basically Buddhist monks stuff. This sleeping position has more to do with a belief system than practicalities. Although, the Buddhist monks will argue that the health benefits that come with sleeping in this position are immense.

This does not mean that modern folks cannot do it either. Many of them do. Unlike the monks, modern folks achieve this by sleeping on a recliner or even use a large wedge pillow – much like the one you would find in a hospital or a doctor’s rooms.

Having been a hospital patient for a protracted period myself, I can honestly say there are few things more uncomfortable than trying to sleep on a large wedge pillow.

Related article – here (sleep positions – the “good” and the “bad)

Video – How Your Sleeping Position Affects Your Health

Follow the easy steps above to achieve your goal of learning to sleep on your back. These steps coupled with the explanations of some other popular sleep positions should help you to persevere and successfully sleep on your back for better health. 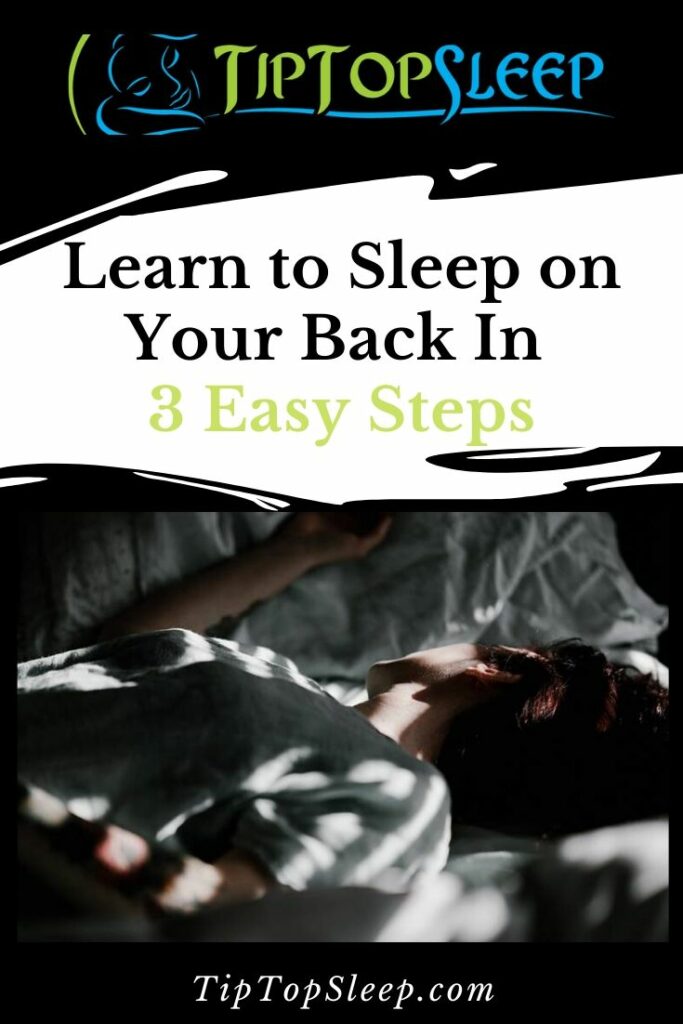