A recent TIME article got tongues wagging when it was suggested to readers that sleeping with your dog is actually good for you.

Having a dog in your bed or even in a bedroom can have its uses. There is little doubt about that. However, the jury is out on whether those uses outweigh the negatives.

The Cons of Sleeping With Your Dog

Off the bat, I would put it to you that sleeping with your dog is the worst possible option when you are somebody who has been grappling with some form of sleep deprivation.

I have repeated many times throughout my website that a lack of sleep is bad for you. Sleeping in the same bed with a dog – or any other partner for that matter – will be detrimental to your health for that reason alone.

One of the many surveys conducted by experts reveals that the majority of owners admit to being woken up by their dogs at least once a night.

Sleep deprivation has a detrimental impact on your health, your mood and your professional and academic performance. That is basically every important aspect of your life.

If a dog can have a detrimental impact on your sleep patterns, then surely that ought to be enough reason to avoid having a dog in your bedroom or even your bed at night.

A Dog Can Really Ruin Your Marriage

More often than not, couples are able to negotiate the tricky terrain that is sharing a bed. The sleep efficiency is seldom affected adversely for couples, partly because they become in sync with one another.

However, bring a dog into the equation and the maths gets complicated. Sometimes, three is indeed a crowd.

Canine expert Stanley Coren explains that 13 percent of couples have admitted to having disagreements on whether the dog should be in bed or not. Of all the things for couples to argue about.

A confrontation of this kind affects your mood before you sleep. We have already determined in previous posts that a low mood reduces quality sleep and that reduced sleep affects functionality during the course of the day, which then affects mood all over again.

Something seemingly this small can really have a detrimental impact on your short and long-term health.

The Pros of Sleeping With Your Dog

What isn’t made entirely clear in the headline of the article is that the study also looks at the presence of a dog in the bedroom, not necessarily the bed.

Sleeping with your dog does not necessarily mean hosting the dog in your bed. On that score, there could be some positives – granted we aren’t dealing with one of those dogs that can never stop barking. If you have a dog that doesn’t bark a lot – bless…

A dog in your bed definitely disturbs sleep. However, a dog in your bedroom is not such a closed case. It is also mentioned that all of the adults used in their study did not have any sleeping disorders and that brings us back to the points made in the paragraphs above.

See also  Do Snails Sleep? If so for How Long?

If you have issues with sleep deprivation, the less company you have in your sleeping environment, the better and that does not only include dogs.

It is also worth mentioning that the majority of the people in the study were women, somewhere in the region of 88 percent. They value the presence of a pet more than men.

Most Owners Allow Dogs to Sleep in Bed with Them

Whether we agree with the practice or not, it has become increasingly apparent to all and sundry that the extensive scaremongering on this subject has not been enough to put dog owners off the idea of sharing bed space with them.

If anything, they have been encouraged to do so and that is thanks in part to contributions made by dog experts like Stanley Coren. Coren himself cited the findings that were made in the above-mentioned study.

Among those findings was that above 60 percent of owners allowed dogs to sleep in their beds with them. He explains that the reasons for sharing the bed with their canine friends ranged from “dogs are warm” to “dogs help me relax”.

Both points are quite accurate. The science proves that dogs are indeed much warmer than human beings – about six degrees warmer in fact.

It is also an established fact that the rhythmic breathing of a dog can help calm you when you are trying to sleep. As we all already know, sleep is good for you and if a dog can help you sleep, then there is no reason to argue against science.

Dogs Offer Protection in the Bedroom

We live in very uncertain and even dangerous times. Even in some of the safest countries in the world, the prospects of having to negotiate a burglary or armed robbery in the household are very real and terrifying.

See also  Where Do Squirrels Sleep?

That fear of being robbed at gunpoint in your own home can be crippling. That kind of anxiety certainly makes falling asleep much harder and makes staying asleep an even more traumatic exercise. There is nothing fun about it.

Some people will opt for more intense security measures in their home, while others will be satisfied with a weapon of choice at the bedside. Guns are particularly popular in countries that are worst affected by crime – and even in the most powerful country in the world (USA).

However, the positive impact that dogs can have is completely understated. Just having that dog in your bedroom or in your bed does the nerves the world of good.

It helps with peace of mind. It makes you feel safer, at the very least. More often than not, that is all which is required to promote longer and healthier sleep.

As I have said before on this site ultimately whatever gives you get your required amount of sleep per night and no damage to your health undertaken – then – that is the best way for you to sleep.

So it is entirely up to you whether you sleep with your dog or not.

I have written about all kinds of living creatures so if you want to know a little about how other animals sleep check out this page here you will find a heap of information.

In my article “The Benefits of Sleeping Alone” you will see why you can sleep better without other distractions in your bed! 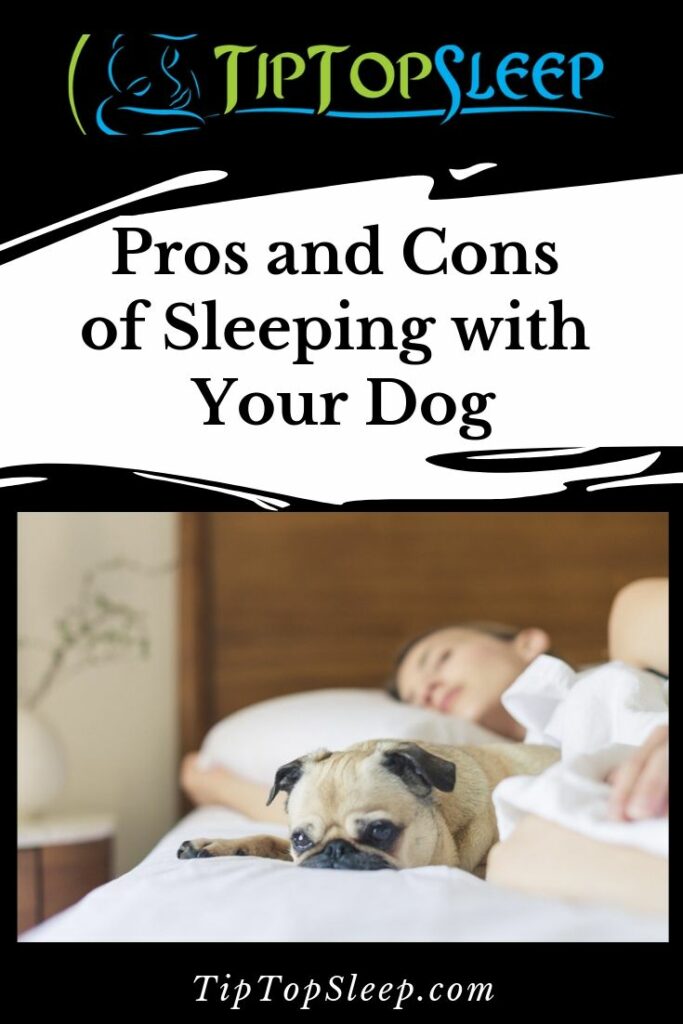