Sleep or study? The answer to this question hinges heavily on what the individual’s desired outcome is. If you are looking for short-term results, study. If you value long-term results you will need to sleep more.

In previous blog posts on this site, we have already looked closely at the consequences that come with not getting enough sleep.

The negative impact of not getting enough sleep should be obvious to us all. Although, sometimes people do not understand the extent lack of sleep can have on their lives.

So often – and this is a good thing – people understand the value of nutrition and do their utmost to compensate for poor nutrition.

Likewise, people seem to have a very clear understanding of just how important it is to study ahead of an examination but they do not spend nearly enough time drafting a meaningful plan on how it is that they intend to get all of that study done, without compromising their sleep routine.

The value of a good night’s sleep is taken for granted, far too often.

Let us be clear, there is absolutely nothing that could possibly justify a failure to get enough sleep, regardless of what might or might not come the next day.

Plainly put, that extra hour of study time is not worth the price you will likely pay, whether that be in the short or long term.

If you have your answer without reading on but need some help with achieving more sleep read this article I wrote which will assist you with getting more sleep.

Here is access to my awesome Sleep Hygiene Checklist which is also beneficial in helping you get organized for more sleep.

Why Do You Need Sleep?

Doctors will often tell you that it is during sleep that many critical things happen with the brain. Chief among those is the removal of toxins that have been built up through the burning of energy during the course of the day.

According to Charles A. Czeisler, MD, Ph.D., Chief, Division of Sleep and Circadian Disorders at Brigham and Women’s Hospital, those toxins get flushed from the brain when you sleep.

That would predominantly happen during what doctors refer to as rapid eye movement sleep – that is commonly associated with vivid dreaming.

So, again, it is all well and good to study for that extra hour but it could prove futile if all of that “extra information” (an hour’s worth) is not adequately stored. The chances are, that extra hour will be a complete waste of time or will not have a material impact on your performance in the said examination.

Dr. Art Markman, from the University of Texas, has examined this very subject comprehensively and his findings are interesting. He is totally and utterly convinced that the academic performance of students suffers – more often than not – when sleep is not prioritized or when sleep is lost.

He notes the flawed logic often applied by students, who believe that they are better off cramming weeks of work into a few hours the night before an examination. There is no compelling evidence to suggest that this technique has produced meaningful results in the past.

Nor is it expected to produce meaningful results in the future.

While we are on this theme, it is perhaps worth addressing this flawed notion that days of being up partying till late can be compensated for by sleeping in on Saturday and Sunday mornings.

That sleep lost during the week is sleep that cannot just be recovered.

The students were in Grade 9, Grade 10 and Grade 12 – to ensure that the complications from different stages of childhood development were all comprehensively thrashed out.

Students That Sleep Less with Age

The aspect of childhood development is an important one. You will commonly find that problems with sleeping early increase with age.

Some students start questioning the wisdom or value of sleeping early – as has been suggested to them by parents their whole lives.

Other students bump into more interesting or compelling evening activities with age. That ranges from gaming to watching pornographic material late at night.

While others fail to do their homework or studying during the day and therefore think it more prudent to catch up on that much-needed school time late in the evening.

While it is true, the academic life becomes significantly more complicated the higher you go in school. There is perhaps also a case to be made that students need that extra hour of study, before getting some sleep.

Even if you believe all of that, the science shows that performance the next day, after failing to secure enough hours of sleep, is poorer than it would have been had the student in question abandoned that extra hour or two of study.

We have already tapped on this briefly above but we will expand on that by highlighting that getting enough sleep at night also helps with memory retention for the next day.

So, that is to say, that when you are in the classroom or even at work, you are likely to be more alert, more focused and your capacity to sustain attention will be far greater than had initially been envisaged.

An active mind is a healthy mind. If you do not get sufficient sleep on the night before, most of the learning that you do the next day will be passive learning. The science also shows that you are likely to learn far less when you are passive than when you are active.

Again, the question then becomes this. Was that extra hour of study at night worth it – whether that be in the short or long term? We think the simple answer to that question is a resounding no.

Students That Don’t Sleep in College or University

At the High School level, the problem is often still manageable. The real difficulties seem to emerge when students start their tertiary education. A combination of college rebellion, party expression, and an increased workload contribute to less sleep from students.

Think about those Grade 12 students who felt that school had become more complicated and intense and amplify that for students who experience college for the first time.

The experience can be overwhelming and in a desperate attempt to compensate for that, students find themselves believing that sleep needs to be sacrificed for additional study time and better results.

That is obviously a myth. What is really needed from students is better planning of the time they have available for study and learning during the course of the day.

It is now a matter of fact that young people do not sleep enough but very little emphasis is placed on finding suitable ways for them to remedy what could become a crisis if the habit is not nipped in the bud.

The experts believe that something seemingly meaningless, like 30 minutes of extra sleep at night can go a long way to solving productivity problems the next day.

Teachers and parents – who really should be aware of these challenges – need to spend more time helping students spread their workload across the semester.

Last-minute work and cramming that often comes with the territory have become somewhat of a tradition now – and to some degree, it even works.

Students will pass the examination in question. There is actually little doubt about that.

The information learned the night before might have been sufficient to get through the examination but it is seldom stored in the long term.

That defeats the whole objective of the exercise. However, that is nothing compared to the detrimental impact a lack of sleep will have on a student’s long-term health – and even their results.

Sleep vs Study – How to Counter the Counter

The National Institute of Industrial Health, Kawasaki, Japan has sought to find ways for students to counter some of their sleep problems – or rather the effects that come with the territory when there is a glaring lack of sleep.

Among their findings was the idea that the impact of sleep deprivation (due to studying) could be to take short naps during the course of the day.

They suggest that 15-minute naps shortly after the lunch break can go a long way to improving your alertness and performance for the remainder of the day.

It is up to the individual if that extra hour of study is really worth it, if and when you have established that you will not get in the recommended amount of sleep for the night.

Lack of regular sleep – whether for study, work commitments or caring for others will have a detrimental effect on your overall health and wellbeing.

Check out my article here if you know you are not getting your recommended amount of sleep and you are always feeling tired. 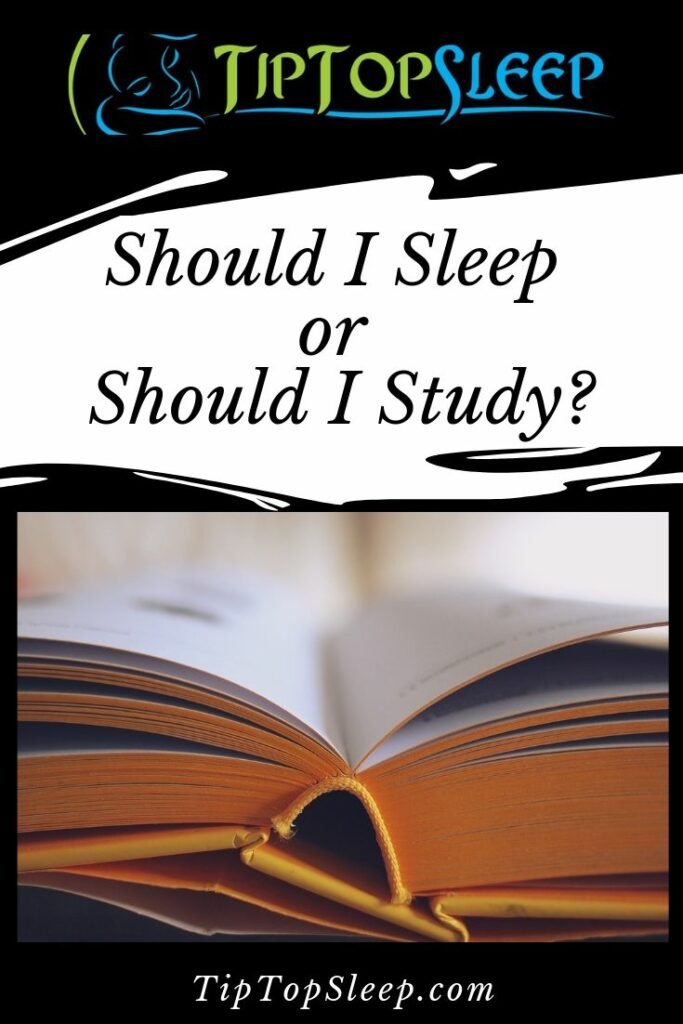