There are few things in life more discomforting than trying to sleep after surgery. The nature of the surgery often determines just how difficult it will be to get enough sleep during the recovery period.

Why Is It Hard to Sleep After Surgery?

The amount of sleep you get after surgery can be determined by a number of things, which include: pain, reaction to treatment and medication and even the psychological burden that comes with worrying about the surgical incision lines.

Doctors will always place a considerable amount of emphasis on patients not putting any extra stress or strain on the incision lines. Failure to comply with those instructions – and sometimes that is out of a patient’s control – risk undoing everything that medical practitioners had hoped to achieve before performing the surgery.

Because patients can end up doing that damage to their surgical wounds without even knowing it, doctors and nurses often have to intervene in the immediate aftermath of a surgery.

Among other things, you want any swelling to be reduced after surgery. You need gravity to help you reduce that swelling. So, whether you are still in the hospital or whether you are allowed to return home after surgery, one of the key aspects is to elevate the affected part of the body.

You may have to spend at least one night in the hospital so in case you do why not be a little more prepared and read this article about sleeping in a noisy hospital. Just click here and you will get a heap of tips you had not thought of.

For example – and this is merely one example – you might have had a surgery in the abdominal region. Recovering from those can be more complicated than you think.

So, under those circumstances, you normally want a little bend at the waist. You see… being straight upright tends to pull on the incision lines in that area of the body.

If the elevation is for whatever reason, not a practical option, there is also the choice of sleeping in a recliner chair. You also want to avoid sleeping on your sides and a recliner chair helps escape that temptation too.

See also  Sleeping After a Workout – Is It the Right Thing to Do?

During the first few weeks after major abdominal surgery, your movements will be hugely restricted. Some doctors advise that tilting slightly to one side when sleeping is acceptable but never sleeping fully onto one side.

The most difficult part during a period like this is avoiding the temptation to ignore the restrictions or even push the boundaries.

It does not serve your interests well to be lying on your side after a hip replacement, for a couple of reasons.

Firstly, it is likely to be very uncomfortable. You are not likely to get much quality sleep under those circumstances. So, while doctors would be advising against it, it is probably a decision that your body will end up making for itself.

Secondly, the healing process will be significantly hampered because of the pressure applied to the tissue surrounding the incision area of a hip replacement.

Experts say it will likely cause some fluid collection and swelling but in addition to that, it can create some problems for your wound. That is once again a healing issue.

The first thing you could do after a joint replacement surgery is to try to keep as active as is possible during the course of the day and avoid the temptation to take a nap while the sun is still out.

It is in your best interests to try and get back to a normal sleep-wake cycle, as soon as is conceivably possible. Being active under these circumstances will come with its restrictions but try and focus on the small tasks during the course of the day.

Try, to the best of your ability, to get out of the house and regain some semblance of your normal life before you went under the knife. Friends will always come in handy when trying to achieve this. Visit your friends and try and get as many of those friends to visit you during the course of the day and indeed the recovery.

See also  Should You Sleep with a Pillow Between Your Legs?

When you are recovering from surgery, you will usually have some anti-inflammatory medication or some narcotic medication. The timing with which you take this medication is quite critical and doctors will normally be better placed to advise you on that.

The idea is to try and have that last dose taken just before you plan to hit the sack at night. Getting the timing of medication intake right will contribute to a solid few hours of sleep, which is a massive step in the right direction.

When struggling to sleep, regardless of the circumstances, the one piece of advice that often comes to the for is that of establishing a meaningful pre-bedtime routine. The word always bandied about is consistency.

To the best of your ability, try to avoid the iPad, the television and any other electronic devices shortly before sleeping. That applies across the board but is particularly relevant here. You have got to get into the habit of letting your brain shut off a little bit before you go to sleep.

That way you go to sleep without too much stimulation.

We insist that the first port of call under these circumstances would be to have a pillow under your head. It seems obvious but some people, after they have had surgery might not like using a pillow. So, that piece of advice was for them.

Secondly, depending on the extent of your support system at home, you should probably have a leg lifter available to help get in and out of bed with. It seems obvious but not everybody would have heard of one and it honestly makes your circumstances more manageable post knee surgery.

In addition, having a leg lifter also helps limit the prospects of hurting or damaging the knee post-surgery. A messy recovery period makes for a messy sleep schedule and the cycle thereafter just becomes chaotic.

One thing you can most certainly be sure of after knee surgery is that sleeping on your stomach is not going to be an option. So, do not even try.

You have to be on your back and sometimes, you can maybe explore the idea of tilting slightly to your side. But that can also prolong healing and it will have an adverse effect on your sleep schedule.

The one major temptation is to put a second pillow under the knee. At the outset, it seems like the logical thing to do. However, for somebody trying to sleep after knee surgery, this can be hugely counterproductive.

See also  Benefits and Risks of Using a Humidifier While Sleeping

The worst thing you could possibly do is have your knee bent all night long. Your best option will actually be to put the length of the pillow under the calf instead.

That ensures that your leg is elevated, that your knee is not bent and that you encounter a lot less pain during the night. Most importantly it helps speed up the healing process, which means you will be back to your usual sleep patterns sooner than what you had previously envisaged.

If you are one of those compulsive individuals who feel that life in bed would be better with a total wedge pillow, the option is available to elevate both of your knees when you are asleep. It is very comfortable but the one caveat to that is that it does bend the knee, which is not ideal in the long term.

To compensate for that, it would be prudent to put two additional pillows under the wedge, with the view to straightening that knee. Truth be told, it does become a lot of admin though and the arrangement with the wedge is not going to get you eight hours of sleep either.

This arrangement is more for those who hope to get a short two hours of sleep, if not less. It is just for that short break, so to speak.

After a couple of weeks, you can explore the option of sleeping on your side once again. Under those circumstances, you would then put the pillow between your two legs to help maintain that much-needed stability. More specifically between the knees, to avoid unwanted strain on those incision lines.

Usually, although this is not always the case, you would have a set of double pillows on top of each other at the head, when you are sleeping on your side.

Moving Around After Surgery – Videos

How To Roll In Bed After Surgery

How to Get out into Bed After Hip Replacement Surgery

How to Get out of Bed After Hip Replacement Surgery

How to Get out of Bed After Knee Replacement Surgery

Your surgical specialists will no doubt provide you with all the information you require for your post-operative management and care. Hopefully, I have also given you a little more information to prepare you for getting the most sleep you can after your surgery.

US National Library of Medicine, National Institute of Health 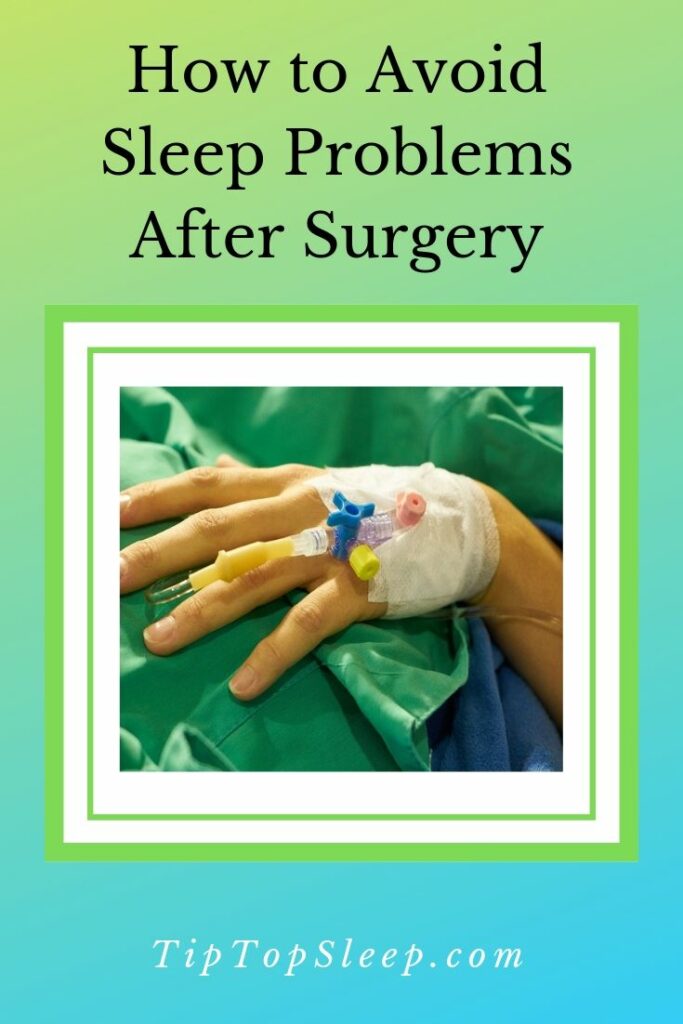