How many spiders we swallow while we sleep has become a source of tremendous debate, fueled by sensational articles like this in The Sun.

The American Arachnological Society has dealt with this particular myth rather comprehensively this time, to the extent that a series of high profile tabloid publications have helped put the reader’s mind at ease about this.

Ripley’s Believe It or Not even got in on the act. The publication which attacked this myth most aggressively though, was the Scientific American, primarily because of the writing resources they have at their disposal.

We all already know, from some form of biology class, that spiders have the capacity to sense vibrations. It is an integral part of the logic behind the creation of a spider’s web. However, that is when the vibrations are used while on the offense.

Those vibrations are also used when spiders are on the defense. That is normally the case when dealing with much bigger and more threatening creatures, like humans. The vibrations humans send off are not something that would ordinarily attract a spider.

When humans are asleep, they breathe, the heart beats and they snore.

So many of those vibes are trafficked through the mouth and nasal cavity – places spiders would probably go if they were to be accidentally eaten and swallowed by humans.

Scientists believe there is compelling evidence to suggest that spiders would not pursue that kind of risk while human beings are sleeping. Make of that common sense what you will.

While humans might not necessarily wake up while stimulated during sleep, the body is more likely than not to react in one way or the other to any movement across the face or even the mouth when such movement is recorded.

Spiders Avoid Danger and Are Scared of Humans

If a spider does sneak up on you while you sleep, for whatever reason, it will be discouraged from continuing with its expedition when it encounters a sudden movement – from the face or even just from a hand. Any insect that small would. It is logic.

Let us all face it, the sight of a human being sleeping can be terrifying at the best of times – even for other humans. Imagine what a spider feels when it encounters that environment.

There is also the small matter of evidence that needs to be interrogated here. So, while it is highly unlikely that you will swallow a spider when you sleep, how does one go about actually proving that to a doctor or anybody for that matter.

How will you ever know that you swallowed a spider? The point is that you don’t, which makes the notion of eight spiders a year all the more ridiculous. A spider walking into somebody’s mouth, while they were asleep has never been documented.

In addition to this, spiders would not ordinarily approach a bed for prey, because there is seldom any to be found there. Bedbugs are obviously a thing but we suspect those will present a bigger problem to you than the spiders, come to think of it.

Why the Rumours About Spiders Entering the Mouth Spread

Well, if we have not experienced it ourselves, we have certainly heard of or know people who have been bitten by spiders while they were asleep. There is usually compelling evidence for an incident like that, like a bite mark.

In addition, those bite marks are usually on the limb, hand or foot.

Sometimes a spider also bites you on the face. However, it is exceedingly difficult to find reliable cases of spiders biting people in the mouth.

That is not out of the ordinary either. However, yet again, there is the evidence required to back such a claim up and doctors have been adequately trained and equipped to handle such developments.

Given what we know about spider bites and spiders nesting in auditory canals, the genuine fear that they could be doing the same down our mouths, while we are asleep, is perfectly reasonable.

Can it happen? Yes! Does it likely happen often, the experts think not.

Spiders That Humans Are Most Likely to Encounter While Asleep

Australia is famous for its spiders, some more dangerous than others. It is among the regions in the world where people report the most spider bites.

Pest Control Experts in Australia normally have a pretty firm handle on this kind of information and most of what they have to say is actually a tremendous relief.

The White-Tailed Spider is among the most common you will encounter in Australia. They generally grow up to about 18mm or less than an inch in size. That is honestly a lot to swallow, without noticing anything.

See also  Why Does My Cat Sleep Under My Bed?

The Black House Spiders grow up to about 18mm – female and 9mm – male in length, which is again almost impossible to ignore – even if you are asleep. The experts say the females of this species never leave their webs. So, you are unlikely to get a visit from them at the very least.

If they are to be found in your household, they are most likely to be encountered in window frames and crevices. Not human mouths.

Finally, we have the Brown House Spider, or Huntsman, which has exceedingly long legs. Impossible to ignore under any circumstances, whether you are asleep or not. They are generally found in buildings, sheds, and walls. A very common feature in an Australian household.

The most interesting thing about this particular species is that the males are known to mate several times before dying – knowing that their legacy has been secured.

Common sense tells us that there are probably not many people who would even be sleeping with their mouth open wide enough for a fly to enter let alone a spider. Add to that the vibrations, breathing, snoring and snorting we make as we sleep any insects or spiders would move away quite quickly to safety.

Hopefully, you will agree that the chances of ever swallowing a spider while you are asleep are slim to none.

If you are still doubtful take a look at the video I found for you below. I am certain you will be convinced after viewing it that spiders and insects really do not want to enter our mouths at any time.

Do You Really Swallow Spiders When You Sleep? – Video 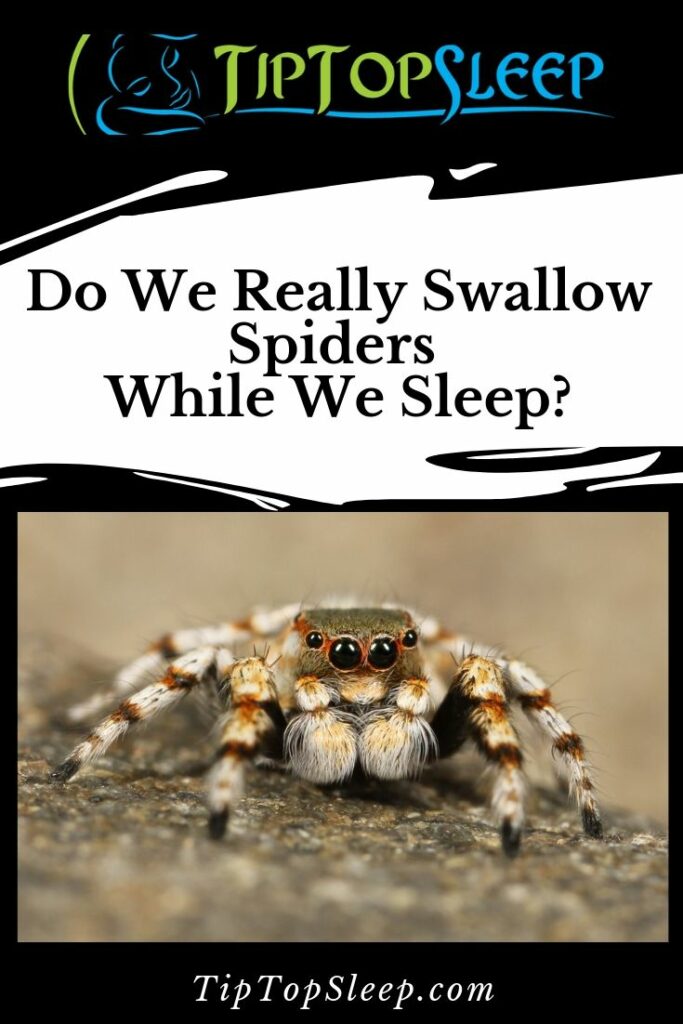